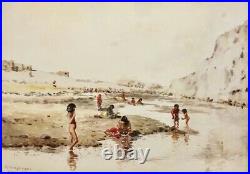 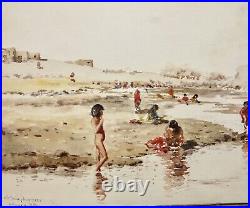 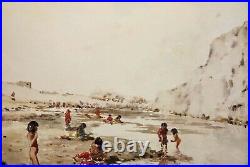 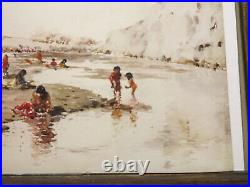 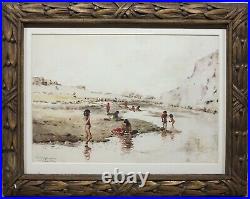 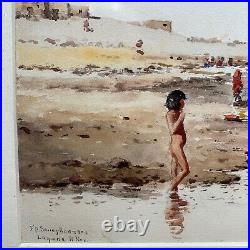 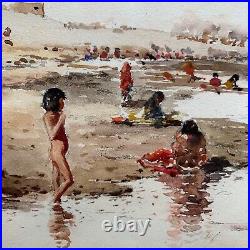 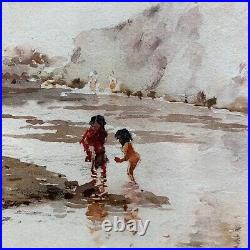 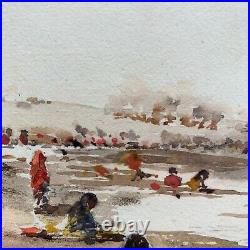 Watercolor on paper measures 7 x 10 inches; 11 x 13 inches in a carved wood period frame. Depicted are the Laguna Pueblo People of Laguna New Mexico. Children bathe and women wash clothes in an expansive desert landscape. Adobe structures are at left and a steep cliff wall at right frame the scene. Very minor pigment fading and very minor paper toning. No tears, stains or repair. Signed, dated with location identified lower left. Titled upper left en verso. Sheet is not glued down, but rather it is hinged with pH-neutral archival materials. Biography: Born in Cantonville, New Jersey, Frank Sauerwein, during a short lifetime of thirty-nine years, became a specialist of western scene painting including Southwest Indians in their landscape. “Had he not died in 1910, he likely could have become the seventh founding member of the Taos Society of Artists” (‘Frank Paul Sauerwein’, Grauer, Harrison, Holmes). From the time he was a student at the Pennsylvania Academy, he signed his last name “Sauerwen, ” although Sauerwein is the correct spelling. Frank studied at the Philadelphia School of Industrial Art, the Pennsylvania Academy of Fine Art, the Art Institute of Chicago, and the Philadelphia Museum School of Art from where he graduated in 1888. In 1891, he moved to Denver because of his tuberculosis, and the dry climate there much improved his health. In the summer of 1893, he accompanied illustrator Charles Craig on a trip to the Ute Reservation of Southwestern Colorado. From that time he roamed the Southwest for painting subjects, although he based himself in California. He grew to love Arizona, staying at El Tovar Hotel at the South Rim of the Grand Canyon and in 1900 on the Navajo Reservation. He became a close friend of Lorenzo Hubbell, well-known trading post operator at Ganado, and spent much time at Keam’s Canyon where he made many sketches of the Navajo and Hopi Indians. In 1901, he taught at a private girls’s school in Denver, and then moved to Los Angeles later in the year. Hollister’s 1903 book, The Navajo and His Blanket. In late 1902, he moved to Pasadena, California but continued to spend his summers in the Southwest, traveling to the Grand Canyon, Acoma, Laguna, Albuquerque, and Taos. In 1905, he traveled in Europe for about six months, and he exhibited his watercolors from this trip in Los Angeles in 1906. He also exhibited his paintings, European and western, in San Francisco, Kansas City, Missouri, and Tempe, Arizona. Martin, and today parts of the Taos Inn are located in Sauerwein’s property. By January, 1907, his battle with tuberculosis was very taxing on him, and, giving into ill health, he retreated briefly to Los Angeles. Martin’s wife, Janet, cared for him, and she also traveled with him to Arizona. When he died in 1910, he left her his property in Taos. Too ill to continue painting, he moved to Stamford, Connecticut where he died June 13, 1910. Upon his death, Sauerwein had requested his ashes be spread in the Painted Desert of northeastern Arizona. In 1911, Taos painter Bert Phillips wrote an essay on the Taos Art Colony and authored these words about Sauerwein: Just as his hand and mind had reached their power and when his art gave forth the fruit long promised, Death took his brush and palette from his hand. Now his ashes are blown by the winds that sweep the deep recesses of nature’s masterpiece of sculpture and color – the Grand Canyon of the Colorado (Frank Paul Sauerwein, Grauer, Harrison, Holmes). The item “Frank Sauerwein 1902 Laguna Pueblo Native American Indian painting New Mexico” is in sale since Wednesday, November 27, 2019. This item is in the category “Art\Paintings”. The seller is “citypictures” and is located in Athens, New York. This item can be shipped worldwide.