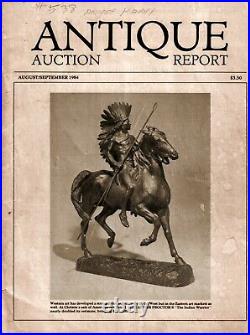 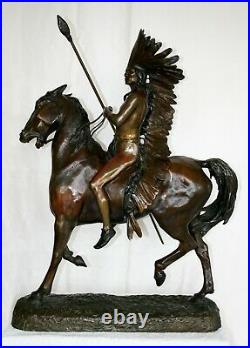 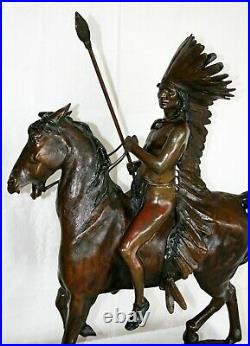 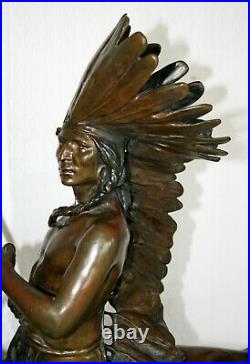 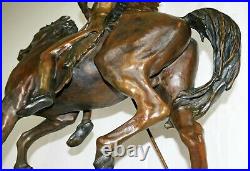 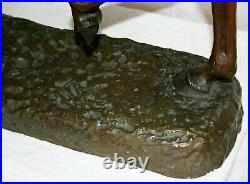 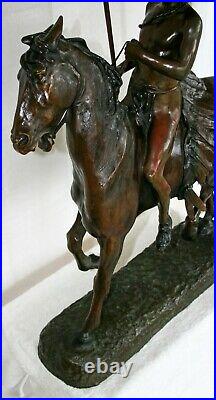 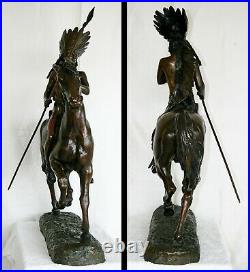 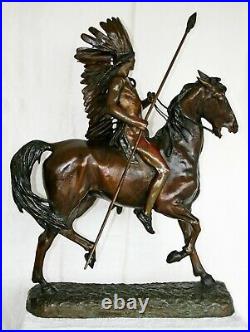 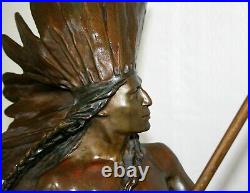 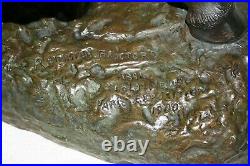 Alexander Phimister Proctor – HUGE! (40″ Inches Height x 31″ ½ Inches Width) – Bronze Sculpture “INDIAN WARRIOR” with brown patina, from 1898 Gold Medal Winner! – Signed, Stamped, and Inscribed along the base:’1898/GOLD MEDAL/PARIS EXPOSITION/1900′ and’Copy Rt 1899′.. (September 27, 1860 September 5, 1950) was an American Sculptor. With the contemporary reputation as one of the nation’s foremost animal sculptors. He is mostly recognized. As a skilled animal sculptor and leader in monumental sculpture on western themes… Born in Canada, he grew up in Denver, Colorado. Hunting and hiking in the western mountain region provided him with knowledge of animal life and behavior. Because of his western background, he became known as the sculptor in buckskin. Proctor studied at the Art Students League and National Academy of Design in New York, and later at the Académie Julien in Paris. His first major project was sculpting life-size animal figures in staff (impermanent plaster and fabric) for the Chicago Worlds Columbian Exposition in 1893. He assisted Augustus Saint-Gaudens by modeling the horses for Saint-Gaudenss monuments to General Logan, Chicago, and General Sherman, New York. Proctors monumental sculptures have become an important part of the civic landscape of America. Among his works are the Buffalo on the Q Street Bridge, Washington, D. Tigers at Nassau Hall, Princeton University; Broncho Buster and On the War Trail, Civic Center, Denver; Pioneer Mother, Kansas City, Missouri; Theodore Roosevelt, Portland, Oregon, and Minot, North Dakota; and Mustangs, University of Texas, Austin. Proctors mastery of animal anatomy and his interest in western subjects also became evident in his smaller sculptures. He created striking representations of a stalking panther, a bear head for the Boone and Crockett club, a portrait bust of Iron Tail, and many other subjects. Proctor spent his last years living with his daughter in Palo Alto, California. “Indian Warrior” , a powerful depiction of a dignified Indian chief prepared for battle, is one of Alexander Phimister Proctor’s most celebrated works. While not monumental in scale, attracted international attention after it was awarded a gold medal for sculpture at the Paris Universal Exposition in 1900. Proctor portrayed the “Indian warrior” in a heroic pose, mounted on horseback as military leaders have traditionally been depicted. To accurately capture the anatomy of the horse, Proctor studied a horse owned by a friend in New York, and gave the horse qualities of elegance and dignity worthy of the Warriors mount. Proctor traveled to the. Reservation in Montana in 1895, to research Indian subjects, and during this trip he modeled a small version of “Indian Warrior”. Although Weasel Head, a Blackfoot, served as the final model for this figure.. In 1896, after Proctor was awarded the Rinehart Scholarship Committee to study abroad, he went to Paris between the years 1897 and 1898, and Proctor rented a studio space from the French sculptor Alfred Bouché at 11 Impasse Ronsin. It was there, immediately when he decided to create the larger size and by 1898, castings of both the large and small versions were available in bronze… He “Indian Warrior” sculpture is not a specific portrait, Proctor created an idealized image of the Indian as a proud and noble Warrior. Artist Nationality: Canadian; American. Artist Birth-Dates: 1860 – 1950. Artist Birth Place: Bosanquet, Ontario – Grew up in Denver, Colorado. Artwork – Titled: “Indian Warrior”. Large Scale Sculpture / Statue. Artwork – Style: Realism. Artwork – Sculpture Measurements: 40″ Inches Height x 31″ ½ Inches Width. Artwork – Weight: 158 lb. Artwork – Medium: Bronze with Brown Patina. Sculpture Color: Beautiful Brown Tones. Subject: Animals, Western, Native American. Figures depicted: Indian Warrior, Horse. The first photograph provided on this listing shows you literature referenced. As reported below the photograph, news shows: Western art has developed a strong following not only in the West but in the Eastern art markets as well. Magazine is included on this listing sale. Signed & Stamped: Yes. Signature: With conjoined initials – APHIMISTER PROCTOR. Inscribed:’1898 GOLD MEDAL PARIS EXPOSITION 1900. Inscribed:’Copy Rt 1899. Inscribed:’Paris’ (along the base). Please, look for photograph number six, eleven and twelve on this listing for details showing Signature, Stamp, and Inscribed on the Statue.. Date of Creation: 1898. Date of Casting: 1900. Region of origin: Paris, France. The “Indian Warrior” made a splash from coast to coast in the United States and beyond during the first decade of the twentieth century. Some version of the Indian Warrior was exhibited in Philadelphia at the Pennsylvania Academy of the Fine Arts in 1900. The large version was shown once in 1901, at the Pan-American Exposition in Buffalo, New York, and twice in 1902 at the Century Association, in New York City. Following those showings, Proctor mounted a major retrospective exhibition of his work in 1908 at the prestigious Montross Gallery on Fifth Avenue in New York City. The exhibition included both versions of the “Indian Warrior”. “Indian Warrior” is Proctors first Indian statue. Sculpture placement: Large strong table. Listed by: Art Dealer. Artwork – Sculpture Condition. Artwork – Sculpture Maintenance: Always stored in safe and secured place / This sculpture was slightly polished for during this listing photographs purpose. This large scale version of “Indian Warrior” can be found in Museums such as: Portland Art Museum, Portland, Oregon / Corcoran Collection, National Gallery of Art, Washington, D. Alexander Phimister Proctor. Please read Item specifics, and description as well. All the photographs provided on this listing are the actual item for sell, and are showing its accurate condition.. Packing will be done in the safest way. Any questions, please feel free to ask. The item “ORIGINAL Alexander Phimister Proctor, HUGE! Bronze Sculpture INDIAN WARRIOR 1898″ is in sale since Thursday, December 10, 2020. This item is in the category “Art\Art Sculptures”. The seller is “mrpdcooler09″ and is located in San Juan, Puerto Rico. This item can be shipped worldwide.