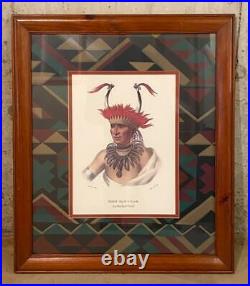 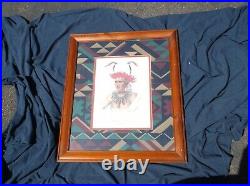 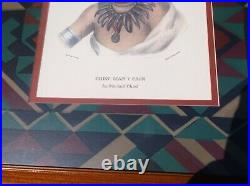 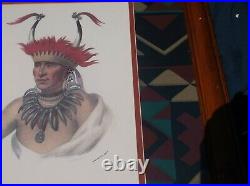 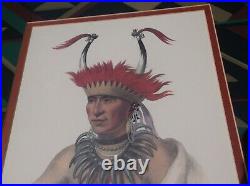 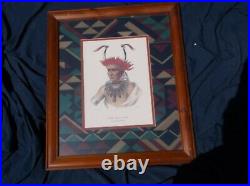 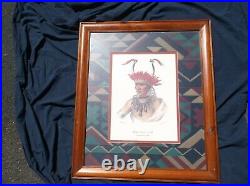 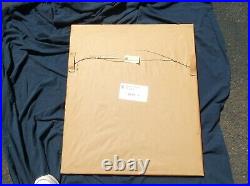 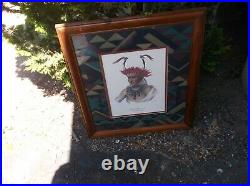 The new screen will show a list of kinds of questions you might want to ask. The last on the list is the word other. Chatting about the piece, the artist and negotiations and other important information would be helpful if you are serious in acquiring any art piece that I sell. This is a fine lithograph of a Native American Chief, Chon-Mon-I-Case who was considered a half chief of the Otoe(also Oto)Tribe about 200 years ago. The tribe lived for centuries in. The upper area of Missouri. It is mentioned as the Otto Tribe on the print, probably a variation of the spelling from the time the piece was printed. The sheet the image is printed on has dimensions of about 14×19. It is well framed and specially matted with a Native American style. The image is in excellent condition and the frame is very solid, with a few chips, no cracks, the mat excellent, the best I have seen of the Lehman&Duval prints. The image is based on a Charles Bird King painting. King was commissioned in 1821 to paint numerous Native American Chiefs that were invited to Washington. The government knew that the Native Americans were disappearing, in part because of government policy. Some leaders of the country wanted at least a record of the tribes’ leaders. He and other artists like George Catlin, and John Mix Stanley created about 290 paintings. Unfortunately most of all these Native American portraits were destroyed in a fire in 1865 at the Smithsonian Institute that held Native American items. A few of his paintings have survived and two I found went into the many hundreds of thousands. His depictions of Native Americans have been widely praised and criticized, you might want to read why. Lehman and Duval made lithographs from the paintings, and in color, and the basic images of the paintings are shown in the many prints that they did. I have no idea when this was printed, Lehman and Duval started their lithographs of King’s paintings in 1836. I could not find how many of the 291 paintings in the Smithsonian Native American portraits that they were able to make lithographs of or when they completed their commission. The original lithographs were all painted in watercolor and at some point antebellum a book was printed of their portraits, I imagine those original books are nearly priceless. I assume the printing of this piece is modern, probably not hand painted in watercolor. The chief unfortunately lost part of his nose before he visited Washington but the artist didn’t depict it here. Chon-Mon-I-Case is also spelled Shaumonekusse and other variations. He was described at the time as a witty, and sociable person, a daring and active warrior who could be duplicitous when trying to conceal his actual sentiments. President Monroe summoned him and other chiefs to Washington to basically have a their portraits painted and a bit of their culture revealed and remembered, Chon-Mon-I-Case brought his youngest wife and both were painted by Charles King. Since the beginning of the America the government has broken every treaty with the Native Americans, and countless battles and massacres and movements such as the Trail of Tears destroyed hundreds of Native American tribes’ cultures. The leaders of the country knew it then, had plans for more of the destruction, but in the 1820’s an anthropologist and a few learned men knew that it would be wise to remember these earliest Americans in some way. They deserved better but hey some people want to forget history or never know it. The greatest gift King and the lithographers did was show the different garb of the leaders, not lumping them as all the same like our movies often did. There are countless misconceptions about the Native Americans including there were no teepees or horses until after the Spanish missionaries and settlers came to what now is the United States in the 1500’s, decades before any of the other European groups. Native Americans in the Great Plains were able to capture some horses that became wild. They designed the teepees as a convenient way to follow the buffalo herds. There were probably 20,000,000 buffalo in the 1600’s and that number eventually was down less than a thousand. Guess why and ask Buffalo Bill. Also, the Native Americans in Mexico and Central America at one time were mathematical geniuses and astronomers who were able to predict solar eclipses thousands of years in advance. This item is in the category “Art\Art Prints”. The seller is “connecticutskier” and is located in this country: US. This item can be shipped to United States, Canada, United Kingdom, Denmark, Romania, Slovakia, Bulgaria, Czech Republic, Finland, Hungary, Latvia, Lithuania, Malta, Estonia, Australia, Greece, Portugal, Cyprus, Slovenia, Japan, Sweden, Korea, South, Indonesia, Taiwan, South Africa, Thailand, Belgium, France, Hong Kong, Ireland, Netherlands, Poland, Spain, Italy, Germany, Austria, Bahamas, Israel, Mexico, New Zealand, Philippines, Singapore, Norway, Saudi Arabia, United Arab Emirates, Qatar, Kuwait, Bahrain, Croatia, Republic of, Malaysia, Chile, Colombia, Costa Rica, Panama, Trinidad and Tobago, Guatemala, Honduras, Jamaica, Antigua and Barbuda, Aruba, Belize, Dominica, Grenada, Saint Kitts-Nevis, Saint Lucia, Montserrat, Turks and Caicos Islands, Barbados, Bangladesh, Bermuda, Brunei Darussalam, Bolivia, Ecuador, Egypt, French Guiana, Guernsey, Gibraltar, Guadeloupe, Iceland, Jersey, Jordan, Cambodia, Cayman Islands, Liechtenstein, Sri Lanka, Luxembourg, Monaco, Macau, Martinique, Maldives, Nicaragua, Oman, Peru, Pakistan, Paraguay, Reunion, Vietnam, Uruguay.