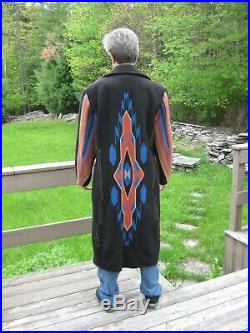 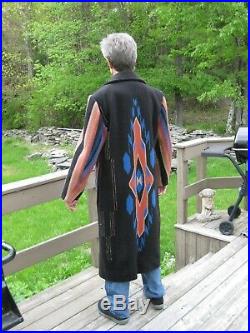 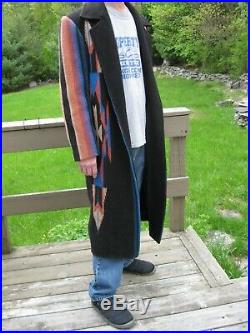 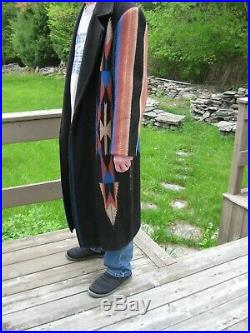 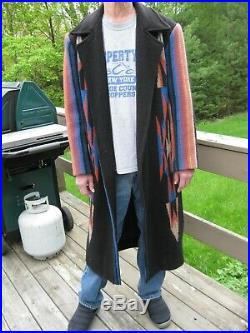 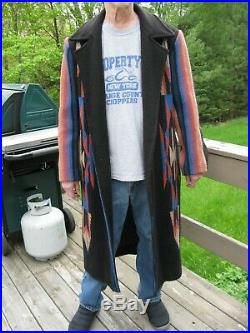 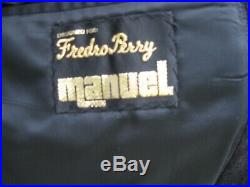 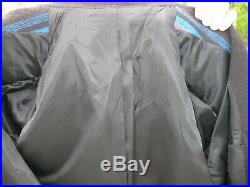 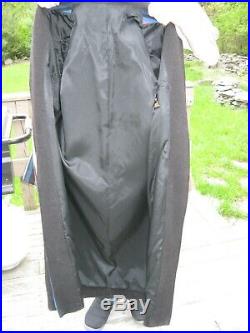 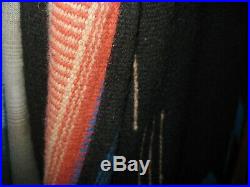 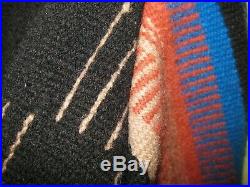 This beautiful and striking Manuel Indian blanket overcoat was made for Fredro Perry of the, according to The Village Voice. Made by MODA and American Design awards winner and living legend, Manuel, in 2001, the coat is almost identical to one featured prominently in a string of videos by Country music superstar and actor, Dwight Yoakam, the multi-platinum (21), GRAMMY, CMA, and AMA Award winning singer, who was a certain Johnny Cashs favorite Country singer, AND the most frequent musical guest in the history of The Tonight Show! Dwight knew he had a great, eye-catching prop in his Manuel blanket coat, and he used it well, and often! Manuel has made garments for Rock & Roll musicians and Country & Western performers for decades. Now about to turn 86, national treasure Manuel, who I like to call, The Most Loved Man in Nashville, where he currently lives and works (still active), has made clothing for everyone from Gene Autry, The Lone Ranger, Roy Rogers, and Dale Evans (who was a huge collector of his designs), to The Rolling Stones, Bob Dylan (the suit Dylan wore for his audience with Pope John Paul II was a Manuel), Elvis Presley, Linda Ronstadt, Elton John, The Grateful Dead, Janis Joplin, Gram Parsons (Manuel made and designed all of the clothes on the first Flying Burrito Brothers’ album, “Gilded Palace of Sin”), and Country stars like Johnny Cash, Porter Wagoner who estimates he has spent hundreds of thousands of dollars at Manuel’s shop! , Marty Stuart (Manuels adopted son), Dolly Parton, Emmylou Harris, Buck Owens, Dwight, of course, and even President Ronald Reagan! And the list goes on and on! Not to mention costumes for hundreds of movies and television shows! Manuel was Nudie’s son-in-law and chief designer, eventually branching out to his own. Nudie, of course, was The Man when it came to dressing Country music stars and movie and TV cowboys, not to mention Elvis Presley’s gold lame suit! Nudie dressed Hank Williams Sr. Lefty Frizzell, Little Jimmy Dickens, Patsy Cline, George Jones, and Hank Snow, among others! Elvis also spent hundreds of thousands of dollars at Nudies shop! And rock stars like ZZ Top and The Beatles custom ordered clothing from him! This coat is about a 38 or 40 slim. It fits me like a glove, and itll fit you like a glove, too, as long as you have the right body type, tall and thin. Family first, tho, and people are always more important than things! Ive only worn the coat once, that I can remember, and possibly, once that I cant remember, when I first got it, but its basically in the same condition it was in on the day I bought it. Its never been to the cleaners or anything like that, that could potentially damage it, however, just now, as I was measuring the coat, I noticed a tiny defect. In the back of the left sleeve, there appear to be 2 broken stitches (see pics). I took a pic of the sleeve as it appears to the naked eye, then another one where I pulled the sleeve forward to expose the 2 broken stitches. I also included a pic of the same spot on the right sleeve for a reference. Rather than have this sewn and not mention it, I thought I would leave it for the new owner to deal with as he sees fit. I tell you sincerely, the feeling you get when you wear this coat, is indescribable, but Ill try anyway. Its like a security blanket. Its like a cocoon. You feel secure and protected, somehow, like you could take on the world. Its almost like armor, if armor was soft, supple, and beautiful. Also, the care and quality put into the making of this garment is evident in every stitch. Its just gorgeous, and you feel great wearing it, which is why it pains me to have to sell it. If you do a Google search for either “Manuel” or “Nudie”, hundreds of pages will come up, and you can begin to get some insight into the magnitude of his contributions to music, couture, and popular culture, in general. Manuel is so engrained and vital to Country Music and the. Musicians community, that he has a just-opened permanent exhibit at the Country Music Hall of Fame in. Scheduled to stay on display until next year! The item “Manuel Indian Blanket Style Overcoat, Nudie, Gram Parsons, Dwight Yoakam” is in sale since Friday, April 5, 2019. This item is in the category “Clothing, Shoes & Accessories\Specialty\Vintage\Men’s Vintage Clothing\Outerwear Coats & Jackets”. The seller is “fredro1111″ and is located in Olivebridge, New York. This item can be shipped worldwide.